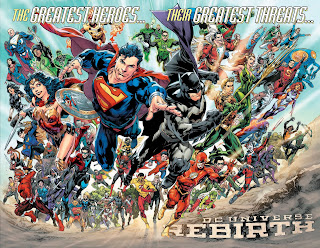 Well, it happened. The DC Universe Rebirth special happened and it shook the DC Universe up in a very, very good way. While I don't think that necessarily the comic books will return to "how it was before the New 52" but I do think that we are on the right track toward making DC Comics great again. The special was written by none other than my main man Geoff Johns. There is one thing that no one can deny and it's that Johns is the biggest DC fan in the world. He knows every character inside and out. It's why, under his watch, characters like Hawkman, Booster Gold, Mera and Aquaman, the Legion of Superheroes were all top selling books when they had previously been written off by DC editorial and their fans. Now he's taken the whole of the DCU and given it a new direction to go in.

Part of what makes this particular Rebirth so exciting is that it allows the fans access back into the world that they know and love. I'm someone that loved the New 52 but still felt like there were things missing from the comics. Rebirth showed us that Johns, and the characters in that universe, feel the same way. I was of the mindset that if the New 52 was to be truly successful then there should have been a complete and total reboot and not just a partial one like they did. Since characters like Green Lantern and Batman were selling so well and their stories were so great, DC didn't want to change any of that. That was a mistake in my mind. Go big or go home, right? It just made everything so confusing. Did Blackest Night happen? Did Final Crisis happen? These things clearly were not sorted out before the New 52 was launched. It was kind of a "Don't worry about it, it's fine" mentality. That doesn't really fly with comic book fans that have invested a lot of time and money into loving their books and cataloging their events not only on their shelves but in their minds and hearts. Rebirth gave us a much better answer than Convergence ever could. Not only had the events pre-Flashpoint existed, but something drastically changed everything and only one person remembered what happened. 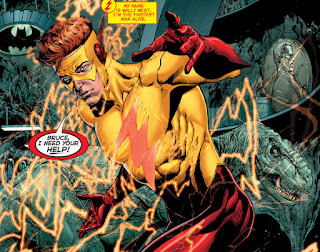 The OG Wally West! Accept no substitutes! He was lost to the Speed Force and was trying desperately to connect with someone on Earth to let them know that something terrible had happened and the world needed correcting. Basically, he was saying DC Editorial fucked up and he's gotta fix it! I'm kidding of course (but only a little).

So we're on our way to restoring DC Comics to their full potential! So what happens now? As with any type of change, it will of course be met with some resistance, in this case, in the form of none other than the all powerful Dr. Manhattan! 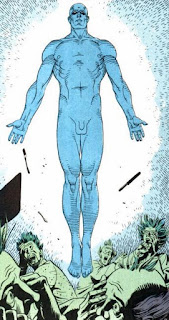 So not only has Geoff Johns successfully brought Wally West back to the DCU, he's brought the world of Watchmen front and center to the DCU! Now that was a good twist! Then of course Johns had to go and ruin it by saying that he's taking a break from comics for a while! 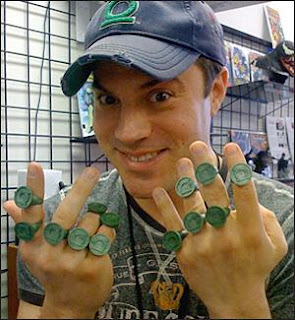 Now I'm certain when the time comes for the Watchmen to take on the Justice League, or at least Dr. Manhattan vs the Justice League, Johns will return to tell that story. Because he started this mess and he better damn well clean it up! But anyway . . .

I can't help but wonder where the comics will go from here. Rebirth left things feeling like it will definitely get better, even if there has to be a little pain before the good can happen. But with the teased return of the Justice Society, Wally West's return and the other Wally West becoming the new Kid Flash, plus the return of pre-Flashpoint Superman, we're definitely going to be in for a very interesting and no doubt very exciting round of DC Comics this time around.

Personally, I'm kind of hoping to see Batman take on Ozymadias, Rorschach, the Comedian, Dr. Manhattan and then make out with Silk Spectre . . . Hmmm . . . maybe I should just go ahead and write that story . . .