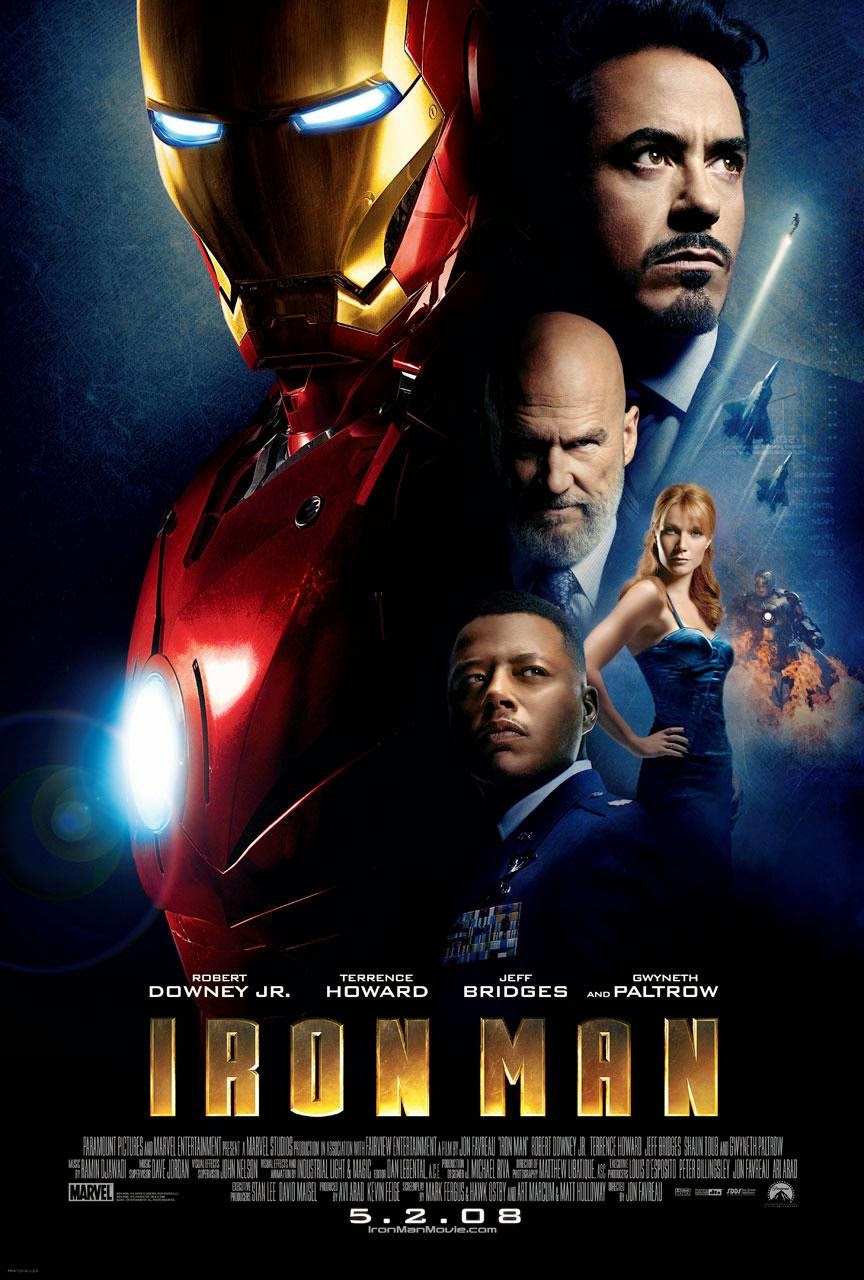 I remember when this film was first announced. It was Marvel's first self financed film. Director - Jon Favreau (from Elf). Starring - Robert Downey Jr. I was already impressed. I've always been a big comic book fan. Anytime a comic book movie is announced I get excited. I didn't know a lot about Iron Man. I knew he was an Avenger. I knew he went through like a billion different armors. And I knew he had an alcohol problem. I was surprised that Downey was cast since the role of Tony Stark seemed to hit close to home for him. I found out later that that was precisely why he was cast and why he was interested. He brought a lot to the role of Tony Stark. The truth is that the movie would have been totally different if another actor had been cast. 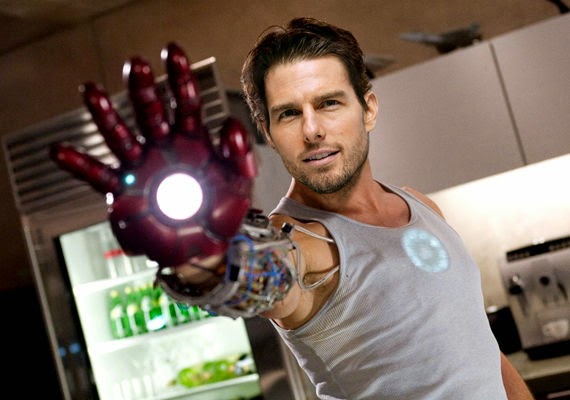 In a parallel world this could have happened . . .

As the rest of the cast was rounded out, I became more and more interested. Gwenyth Paltrow, Terrence Howard, and Jeff Bridges! These are all Oscar nominated/winning actors (including Downey)! Marvel wasn't afraid to go for some real talent for this film. I was thrilled. I've said before that I'm a sucker for a good trailer but I'm also a sucker for a good cast. I liked all of these actors and knew that they would bring quality performances. Once the trailers rolled in, I was sold. This movie was gonna be great! 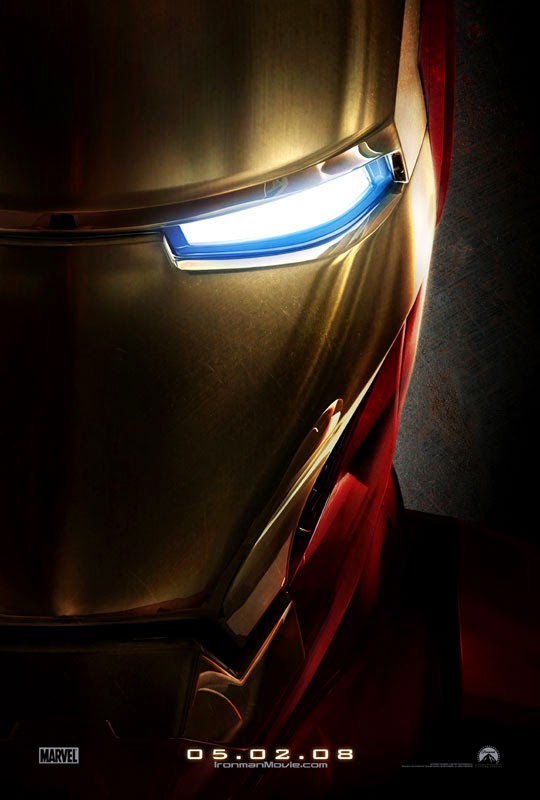 I mentioned in a previous post that Iron Man is one of the most important comic book movies ever made and I maintain that. After watching the film, I could tell that comic book movies were changing. During that end credit scene, we were on the way to something new and exciting. Suddenly, the movies were connected. We were going to get an Avengers film! It all started with this movie. If this movie hadn't been as good as it was, the budding Marvel Cinematic Universe would have been dead before it had a chance to live. Thanks to Robert Downey Jr's performance, the amazing special effects, and the promise of a larger world just outside Stark's door, this movie opened the door to the Marvel Universe.

Side note - I went to this movie on a date with an old girlfriend. I was actually nervous that I was gonna annoy her with how excited I was during the movie. Turns out she was geeking out way more than I was. That was a good feeling. It made me realize that I wasn't crazy for liking these movies as much as I did. Everyone can enjoy them now. So called "nerds" were growing in numbers.

NEXT UP - THE INCREDIBLE HULK 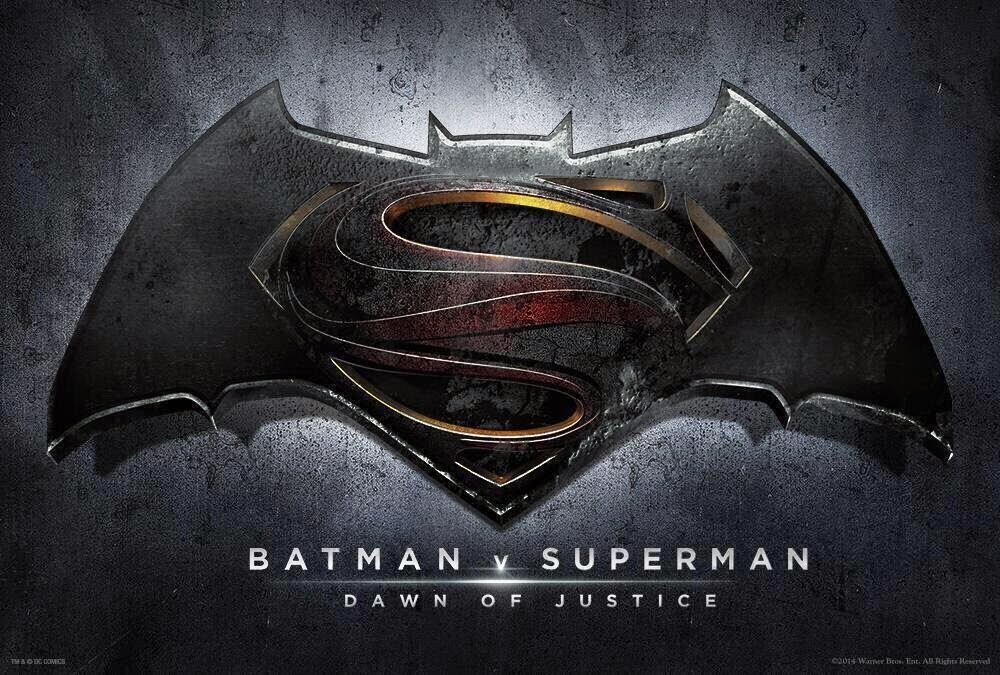 So . . . the Batman v Superman: Dawn of Justice trailer . . . It was amazing. It was everything I hoped it could be. Well, you know for a trailer. I’m a sucker for a good trailer. Obviously, trailers need to sell the movie. It’s not enough to just put up posters in the movie theaters or word of mouth. A trailer has to be strong, exciting, and show just enough to whet the audience’s appetite. People complain that a lot of movie trailers these days give away the best parts. While this is true in a lot of situations (Amazing Spider-Man 2 is super guilty), I think a well made trailer can show just enough to get people excited. More than anything, it has to get you to ask questions. The more questions you’re asking about a film the more likely you’ll want to see a film. Batman v Superman showed just enough of the plot and Batman’s potential involvement to get this particular geek over the moon excited.
The movie is a still about 11 months away. This trailer showed just enough to get people talking and let everyone in on the fact that not only are Batman and Superman gonna throw down, but that the rest of the world is also pretty pissed at Superman too. What are the main takeaways from this trailer? 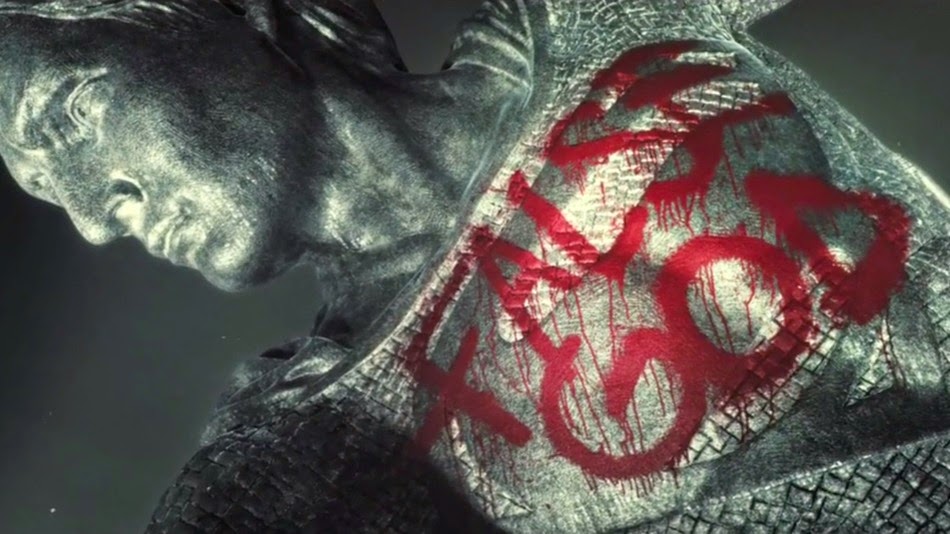 SUPERMAN IS A VERY CONTROVERSIAL FIGURE

The main complaint about Superman in general is that he’s just too powerful. The main complaint about Man of Steel is the level of destruction that Superman and Zod caused during their battle. The trailer clearly shows us that these two complaints are front and center at the controversy surrounding Superman. He’s a being that’s far too powerful and, as has been previously demonstrated, if left unchecked he could cause a lot of damage to the world. Is he a savior? A god? A menace? Looks like Batman intends to find out. 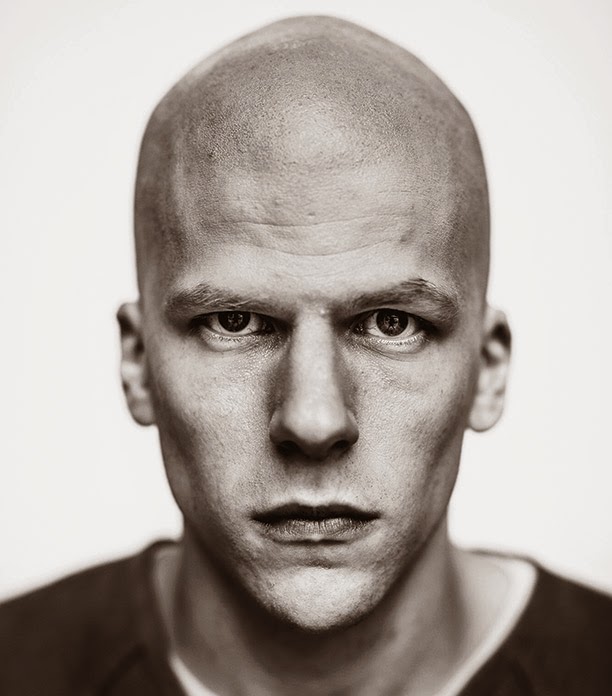 LEX LUTHOR IS STIRRING UP SOME (HELL)FIRE

One of the voice overs is none other than Jesse Eisenberg as Lex Luthor. His line is very fitting to his comic book relationship to Superman. He says, “Devils don't come from Hell beneath us. They come from the sky." This shot over the voice over is someone reaching out to Superman for help. It’s a very ominous way of looking at Superman. But it totally fits that Luthor would see Superman as the Devil while Luthor sees himself as a Christ figure to protect humanity. What an egotistical dick!

BATMAN IS PISSED OFF

One of the other voice overs comes from Jeremy Irons as Alfred. We see a pissed off Bruce Wayne staring at his Batsuit while Alfred warns him about his rage. One of the reasons Ben Affleck was chosen for the part of Batman is that he’s older than Henry Cavill. He’ll look like a Batman that has been through the ringer and has a big chip on his shoulder. Seems like a lot of his frustration will be taken out on Superman. 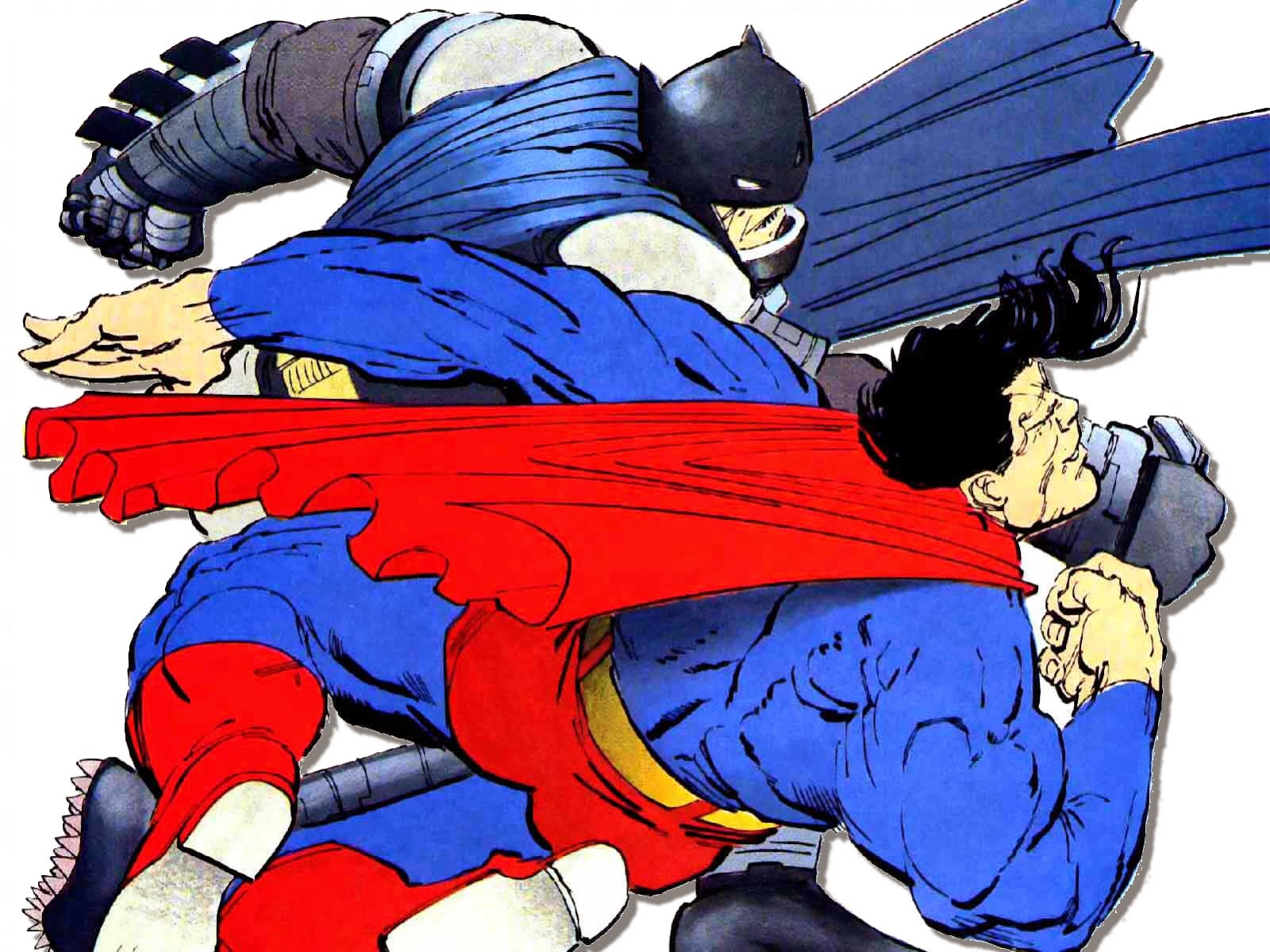 BATMAN V OR VS SUPERMAN ?

A friend of mine offered an idea that the “v” in the title was significant as opposed to a “vs.” Basically the “v” refers to more of a legal battle as opposed to actual fisticuffs. Now, that would make for a hilarious College Humor or Buzzfeed video but as far as a film goes? Uh, no. We want to see Batman VS Superman, not a Batman V Superman. And it looks like that’s what we’re gonna get. We will see Batman and Superman duke it out “Dark Knight Returns” style. Even Affleck’s line at the end of the trailer was very Frank Miller-ish. I'm sure there will be a "legal battle" so to speak, with Superman having to defend himself and his actions to the world and prove himself a hero to the world and to Batman. But of course, the idea is also that Batman is an old curmudgeon so maybe it takes Superman's idealism to knock him out of his apathy. 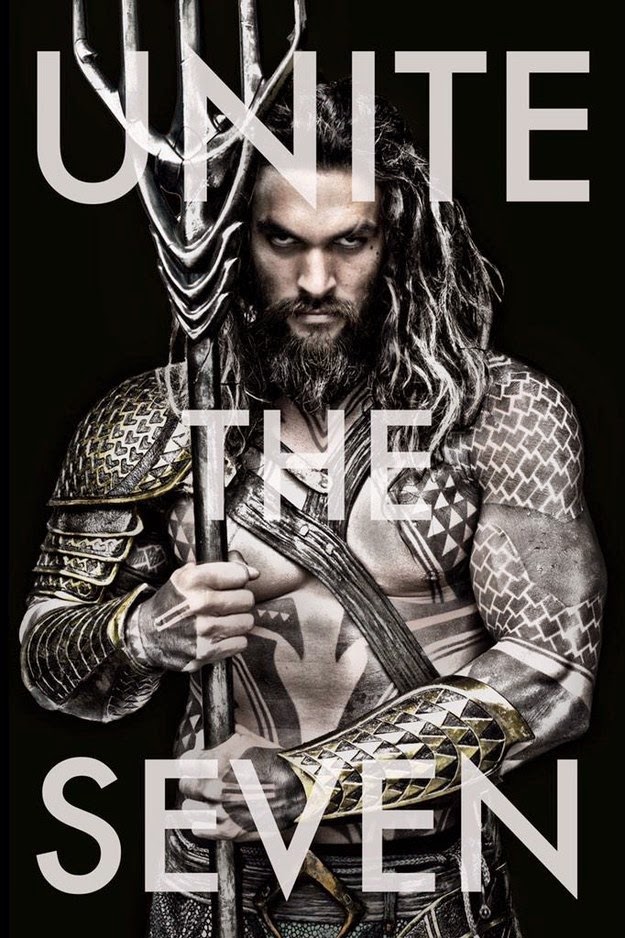 The subtitle Dawn of Justice was met with controversy from day one. We were led to believe this was just going to be Batman guest starring in a Superman film but then the subtitle came along and reminded us that a Justice League film was on the way. The surprising thing to me is the lack of other characters that show up in the trailer. We’ve seen pictures of Gal Gadot as Wonder Woman and Jason Momoa as Aquaman, yet they are absent from the trailer. It’s probably a smart move considering that the film is called Batman v Superman first and foremost and that’s what most people are expecting to see. Nothing wrong with that of course. I get why we don’t see the other heroes in this trailer but I am surprised that we don’t see Amy Adams, Laurence Fishburne, or any of the other supporting cast. It’s a little shocking given that the trailer mostly focuses on the negative public perception of Superman over the positive. But I guess it makes sense given my first point. The film will mostly be about Superman having to prove himself a true hero in the world and not a monster. 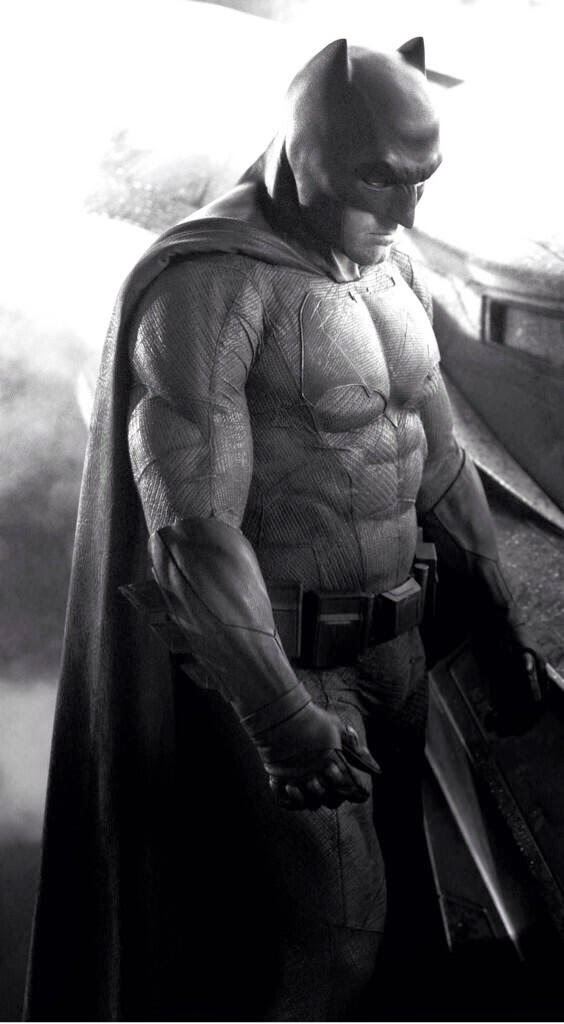 With just about every comic book movie that comes out the actors and producers talk about how different this version will be or how the characters are updated and all that shit. Usually I take those comments with a grain of salt. Jennifer Garner, Ben Affleck’s ridiculously hot wife, said how Batman’s voice would sound totally different in the film and be a reinvention. Yeah, yeah, how different can a gravelly voice be? Then I watched the trailer and allowed my jaw to hit the floor. Assuming the last line of dialogue is in fact delivered by Ben Affleck then we can safely say that we have not heard a Bat-voice like this before. Even the attitude is different. As I said, it sounds like a Frank Miller kind of line. I do mean this as a compliment, despite Miller’s recent shitty work. His 80s stuff was on point though . . . Anyway! Affleck and Zack Snyder clearly took the time to make sure that this Batman felt completely different than what we’ve seen previously especially given how much Christian Bale is probably still fresh in people’s minds. Whether or not Affleck’s version of Batman clicks with audiences remains to be seen. At the very least, we can applaud him for trying something different. The voice is obviously enhanced by his armor but it's still pretty bad ass. I love that it sounds almost demonic. Very fitting for a creature of the night like Batman.

The whole trailer was just about perfect. It was exactly what I wanted to see. I've watched it like 30 times and I'm pretty sure I'll watch it 100 more times before the next one comes out. It's gonna be a long wait for March 2016 . . .