Ten Stories I want to see on The Flash this fall

This fall one of my favorite comic book characters is getting a new TV show! Barry Allen aka the Flash will be on primetime TV! Flash has been a favorite of mine since Blackest Night and Flash: Rebirth. I had read a little bit of Geoff Johns run with Wally West and I enjoyed it but it wasn't until Barry came back that I became a true Flash fan. So yeah I missed Mark Waid's run (my apologies I'll get on that soon). But I still know my way around the Flash and some of the best stories out there (after all I'm a huge Geoff Johns fan) and thought of some great stories I'd like to see adapted on the TV show this fall.

10) WALLY WEST - This one was pretty obvious right? He's probably on everyone's wish list for this show. Given how quickly Roy Harper was introduced on Arrow it's a good bet that Wally will make an appearance in season one. Of course the producers specialize in trumping expectations so it might not be till season 2 when we see Wally. Either way, Wally West is too important of a character to be missed on the show. Plus with Iris being confirmed as African American we can safely assume Wally will be too. So get ready to look racist Flash fans! Haha just kidding! (but seriously get over it, you do look racist) 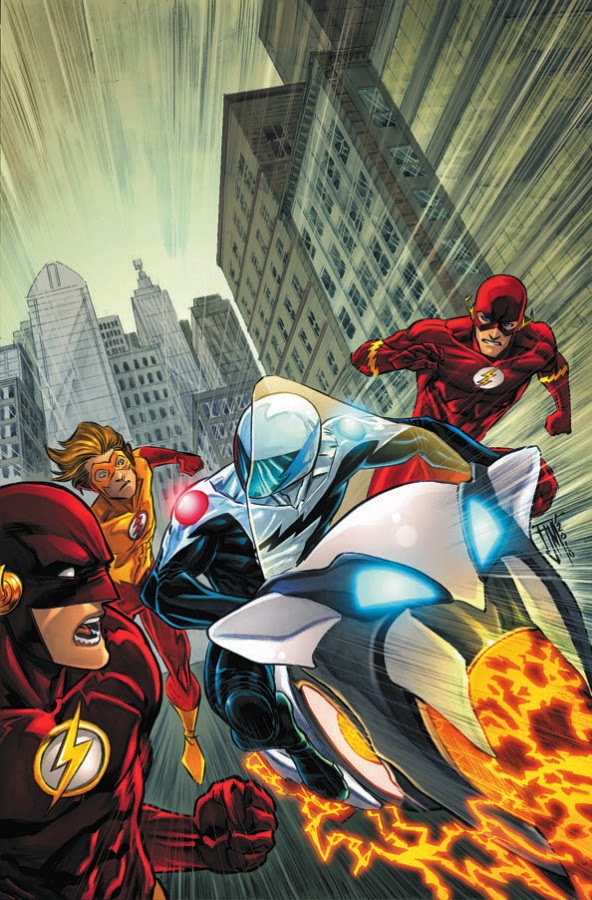 9) HOT PURSUIT - One of my all time favorite Flash stories. Granted the whole thing revolved around Hot Pursuit believing Bart Allen was a time anomaly when it was actually the Reverse Flash (Spoilers!). That story may not work on the show without Kid Flash and/or Reverse Flash but the idea of an alternate dimension Barry Allen would be an awesome episode or episodes. I'm sure it will come up on the show at some point but alternate universes are a staple of sci fi TV shows not to mention comic books so this kind of story will happen eventually. 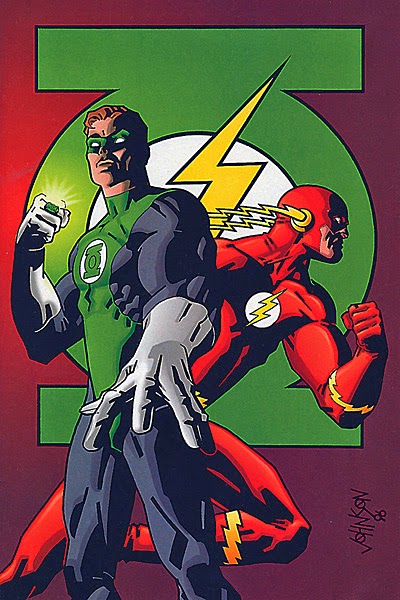 8) GREEN LANTERN / HAL JORDAN - First of all shut up! We're not talking Ryan Reynolds here! Secondly, don't act like for one second you wouldn't rather Hal be on the show than Ronnie freaking Raymond. (If anyone from the CW or DC Comics is reading this then please note I'm super excited to see Firestorm). Regardless I still think Hal Jordan deserves his due in live action and I hope he'll show up on either Arrow or the Flash. Hal is an important character in the DCU and deserves either his own show or another movie. I think enough time has passed to see a new, better take on Hal Jordan. Greg Berlanti is a fan and Geoff Johns literally rewrote the book on a successful Green Lantern story so let's see this happen! Also like I said I loved Barry during Blackest Night so he and Hal already have a great rapport in my mind.

7) THE BRAVE AND THE BOLD - As of this writing it has been confirmed that episodes 8 of Arrow and Flash are going to be a crossover. I'm still gonna talk about how awesome this idea is.  It makes perfect sense to crossover with Arrow at least once a year. The comic books do it all the time, why should the shows be any different? Whether it's a common enemy that unites them or even just a common theme, the shows are forever linked now. Buffy and Angel had this connection between them so it will be interesting to see what these two shows do together in the future. 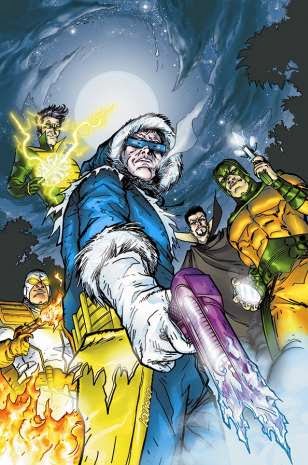 6) ROGUES REVENGE - Another Geoff Johns story that convinced me that the Flash's rogues weren't jokes. These are serious villains who can not only take on the Fastest Man Alive but they can beat him too. The story takes place during Final Crisis and features the Rogues fighting a few thugs who think they can take their spot in the criminal underworld and the evil young speedster named Inertia. Johns has made it clear time and time again that he loves villains, especially the Rogues. Since he's a producer on the show and I think a member of the writing staff it's a safe bet we'll be getting plenty of Rogue-centric episodes as the show goes on.  I personally have no problem with that :) 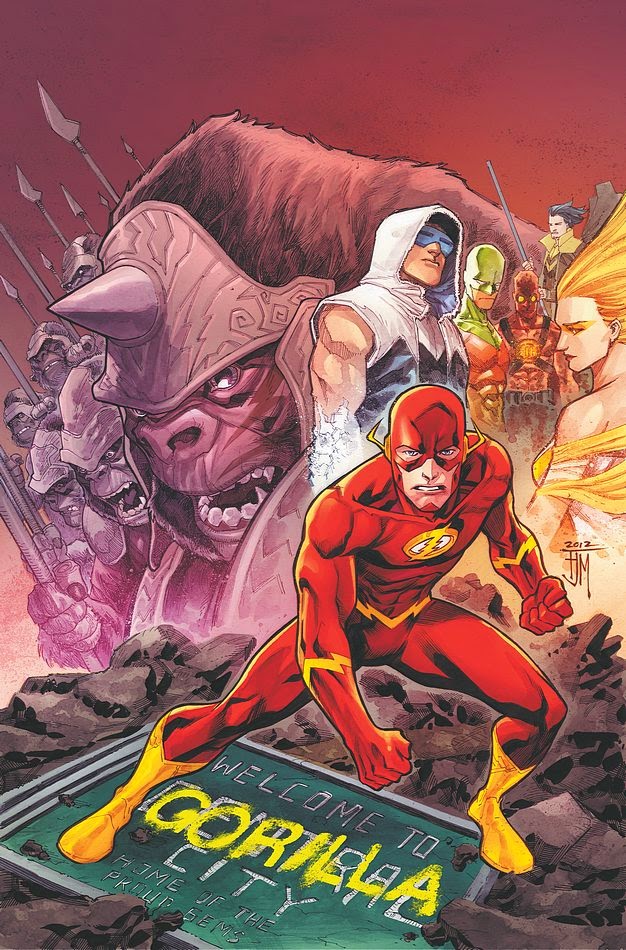 5) GORILLA WARFARE - This is one of the more recent stories and probably a really, really tough sell for a TV Show.  Heck, this is probably a tough sell altogether given the popularity of the new Planet of the Apes movies. However, I'm a huge Gorilla Grodd fan and I loved this particular storyline. It was great to see the Rogues and the Flash have to team up to fight a common enemy.  Plus, Grodd's recent stories have been about him trying to steal the Speed Force and kill the Flash.  In my opinion the character has never been better and he is one of my favorites.  I would love to see him on the show in some form.  I'm hoping we won't see him as some humanoid dude ala Smallville.  Grodd deserves his moment in the spotlight and who are we to take it from him?  I'd prefer he didn't try to eat my brain! 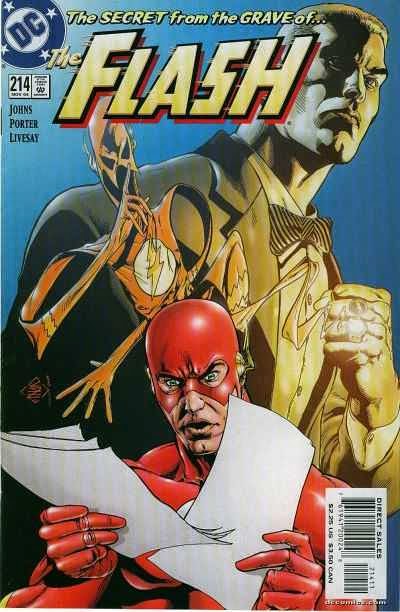 4) THE SECRET OF BARRY ALLEN - Obviously, I'm only referring to the actual Barry Allen side of this story since Wally was the Flash during it.  In short, Wally discovers that Barry had lobotimized the Top and Barry is requesting that Wally fix him.  The Top, in just this story, became a favorite of mine.  He was evil and scary.  He was the kind of villain that I felt like the hero may not defeat.  As ridiculous as the costume and even the name of the villain is, he can be a credible threat to the Flash and Central City. 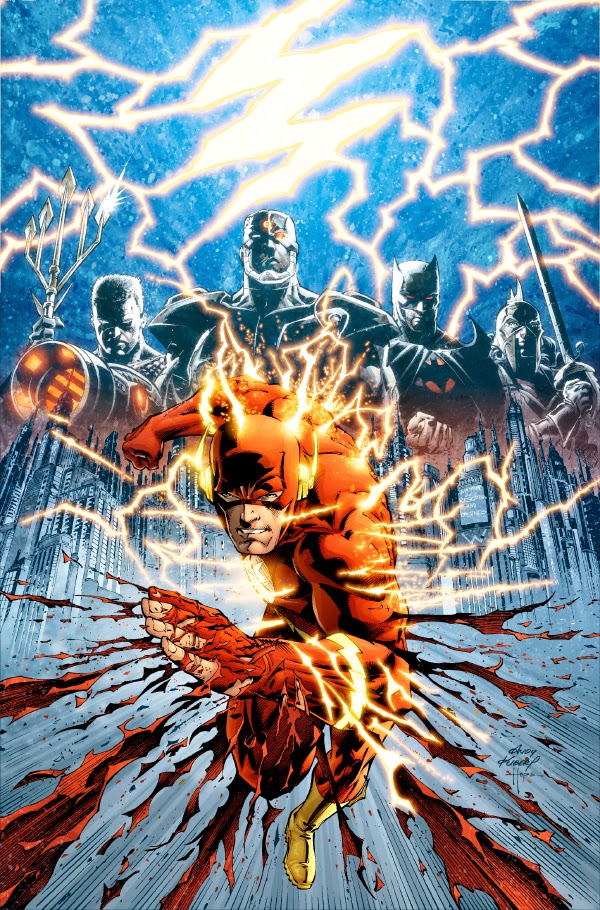 3) FLASHPOINT - Next to Blackest Night, this is my favorite DC event.  I love alternate timelines and Flashpoint had one of the best ones.  Some of the changes that occurred during the event stuck around (in some way) like Cyborg's status, Thomas Wayne as Batman, and Pandora!  I'd like to see some arc where Arrow is affected by the Flash's meddling with time. Maybe Tommy becomes the Arrow?  Maybe Thea was never born?  Maybe Barry and Felicity are dating?  Who knows what could happen but I do know that seeing Flashpoint adapted in some way would be pretty awesome.  Also, as I mentioned before, alternate timelines are a staple of Flash storylines.  Odds are, we'll be seeing some crazy sh*t on the show sooner rather than later. 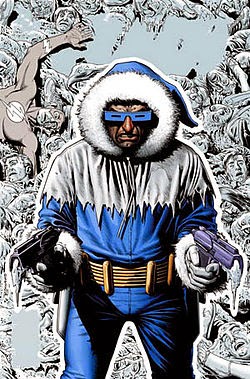 2) ABSOLUTE ZERO - No this is not a Flash story, but as Geoff Johns keeps reminding us, the villains are just as interesting as the hero and in some cases, they are much more interesting.  This is one of my favorite comics of all time (and wouldn't ya know it, it's written by Mr. Johns!).  Captain Cold is by far one of the goofiest looking villains in all of comics.  He wears a parka, has cold guns, and fights a man that is faster than speeding bullets (it fits for Flash too!).  This story helped give me reason to believe that he could not only stand up to the Flash, but take him down.  That is no easy feat considering the power levels that the Flash has.  Leonard Snart was just a blue collar criminal that was tired of getting beaten up by the Flash so he created a gimmick.  And man, did it pay off for him!  Now he's one of the Flash's most dangerous foes and the leader of the Rogues.  He's a wonderful character and he's already slated to appear in episode 4 of the series this fall.  This particular story may not happen for a season or two but I'm willing to bet as the show goes on that the Rogues will be series regulars. 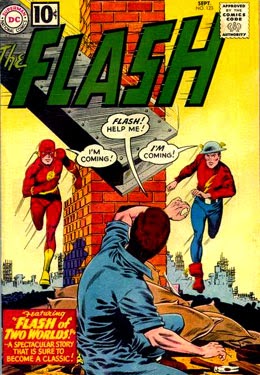 1) FLASH OF TWO WORLDS - I mean this one was pretty obvious right?  I think Jay Garrick, just like Wally, is an essential part of the Flash legacy and I think it would be great to see him on the show.  The original Flash series paid homage to Jay by having him be Barry's older brother.  I can't help but wonder if the real Jay Garrick would have shown up in a later season had the show continued.  But that's neither here nor there.  I doubt the series would have a Crisis that would link our world to Earth 2 or anything like that but it would be cool to see the Flash visit parallel dimensions.  As I stated earlier time travel, parallel dimensions, and alternate timelines are staples not only for the Flash but for comic books and sci fi anyway.  It's not really a question of if we'll see Jay but more of a when. 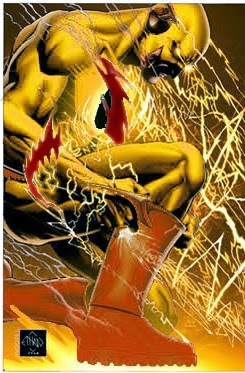 We already know he cameos in the pilot, but what's the deal with this Eddie Thawne character?  Hmm . . .
Posted by For Comic Junkies at 8:25 PM No comments: